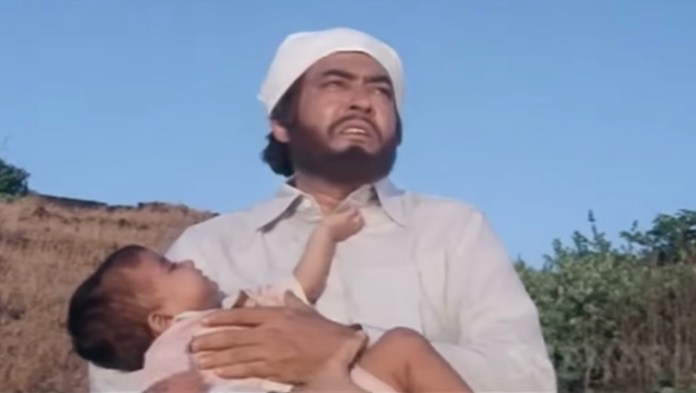 Bollywood has had a long tradition of lampooning the Hindu from the Southern states. Take, for example, Mehmood playing Masterji, who crooned Ek Chatur Naar in Padosan. Or the effiminate Carnatic musician Natrajan in Aamir Khan’s ‘Hum Hain Rahi Pyaar Ke’

However, director Subhash Ghai and writer Kader Khan took this caricature one step further in Vidhaata, which features a song called “Muthuswami bada harami”, featuring a clownish stereotype of a southern Brahmin as a loony dancer.

Because of songs like these, first-generation migrants from the southern states faced considerable ridicule in workplaces and academic institutions by Bollywood fans.

A Brahmin from south of India typecast as a loony dancer. An overall vulgar song, sung by industry veterans.

Thanks to this number, film Vidhata by Subhash Ghai became a blockbuster in 1982.pic.twitter.com/977trnz6jw

The same song goes on to make an out-of-context mention of Ram while stereotype Rajasthanis in a cheap way.

"Ram" is uttered out-of-context to stereotype Rajasthanis in ugly way in most disguting Bollywood song ever crooned by top veterans.

In another part of same song, Carnatic dancer pandit is called "harami".

While lampooning Brahmins, the film is blatantly soft towards namazis, as is typical of Bollywood films. Actor Yusuf Khan aka Dilip Kumar is shown cursing Lord Shiva for a personal loss he faces, but later in the film, a Muslim man reading namaz on road miraculously saves his child.

The filmmakers also display a morbid sense of humour. In a scene, Amrish Puri tells Dilip Kumar that he has planted bomb in his car. Dilip bursts into a laugh while informing Amrish that the latter had planted the bomb in a wrong car and those had just been blown apart were innocents not known to him.