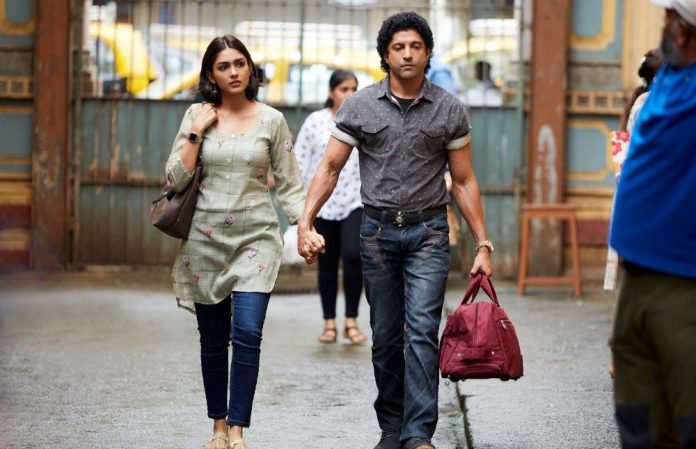 In a nutshell, Farhan Akhtar’s ‘Toofaan’ promotes the narrative that any father trying to protect his daughter from ‘Love-Jihad’ is a Hindu bigot who shouldn’t be taken seriously by couples in “true love”.

Of course, Censor board chief Prasoon Joshi wasted no time in approving this film that projects the Hindu in a bad light. He was equally quick in rejecting ‘The Conversion’ movie, which was closer to depicting real-life Love-Jihad cases than ‘Toofan’.

Akhtar claims to be an atheist and a communist in real life. In Bollywood, people with this ideological combo must vehemently attack rituals, beliefs and customs dear to Hindus and only Hindus. Akhtar has never shown the zeal or courage to attack any Abrahamic faith. If this ideology isn’t pure hypocrisy, then what is it?

This movie also includes BJP MP Paresh Rawal, who has made a career out of blatantly promoting Hinduphobia and lopsided secularism.

Even in this film, he plays a devout Hindu, who hates the fact that his daughter Ananya (Mrunal Thakur), a practicing doctor at a respectable hospital wants to live-in with an extortionist in Dongri who beats up shopkeepers for money. The film preaches that the father is wrong in opposing such a match made in heaven.

Watch this scene where Paresh Rawal’s daughter played by Mrinal Thakur demands he apologises to her boyfriend Aziz (Farhan Akhtar) for getting angry at Aziz for having a relationship with his daughter. When the father tells her she is victim of Love Jihad, the daughter rebukes him saying “aapki soch Kharab hai” (your mindset is rotten).

Earlier Prasoon has worked with Farhan to mock Hawan ritual

He has now rejected censor approval to #TheConversionMoviepic.twitter.com/p9XQ8rNllT

This scene, below, further establishes that the father is a hateful bigot and thus all fathers opposing Muslim partners for their Hindu daughters are bigots. His secular friend rebukes him for his bigotry and gives him lessons on what is ‘true dharma’.

Censor board chief @prasoonjoshi_ had no issues granting approval to "Toofan" by his old paymaster @FarOutAkhtar that was an LJ propaganda. @SirPareshRawal led by mocking "Hindu bigots"

Another message, which is in line with Bollywood’s long-running agenda: Devout Hindus are scheming villains in every decade. And Hindu women are unhappy in their parental home till they find true love that encourages them to disown their families to walk away with that “worthy man”.

In another scene, Hindus are shamed for being bigots by not renting out to Muslims.

Samudaya Vishesh is not allowed in Hindu society if they want to live-in with a Hindu girl. You have to change your name. Hence forced to fake identity.

It is noteworthy that Bollywood often behaves like the Mumbai campus of Lahore film industry. Check out these two tweets by Gems of Bollywood comparing interfaith narratives in films from Urduwood and Lollywood. Both film industries have a similar agenda with interfaith love stories – the woman must be Hindu, man must be Muslim and woman must convert.

Theme is the same – Hindu woman is desperately in love with a Muslim man while her hateful, bigoted father spews venom at the peaceful communitypic.twitter.com/zaVWzg33eu

She also falls desperately in love with a Muslim man and proves her bigoted father wrong!pic.twitter.com/4JJBF02mFV

Can you try to reimagine these scenes happening in a non-Hindu household? For example, imagine a Bollywood scene where an open-minded Muslim woman shuns her father’s bigotry and walks away to live-in with her Hindu lover. Of course, you can’t.

The movie plot, after promoting Love Jihad in the first half, turns into an insufferable and wannabe Rocky rip-off in the second half. This Toofaan is nothing but annoying Urduwood dust blown in the eyes.