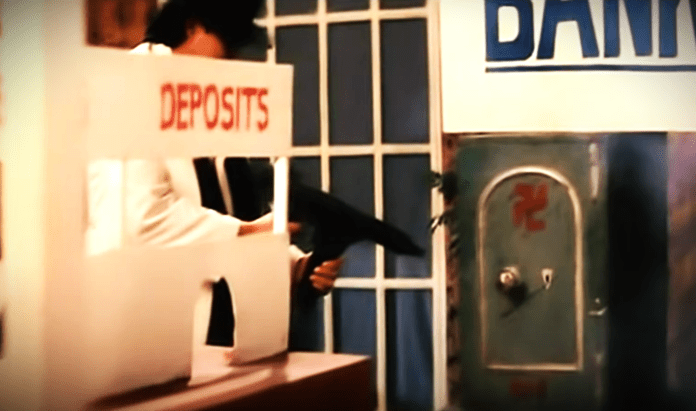 Bollywood-wallas often claim they respect all religions equally. However, there is enough and more evidence to suggest that no religion gets as poorly treated as Sanatan Dharma in their films.

Take the film Kabhi Haan Kabhi Naa. This film is the story of Sunil (Shah Rukh Khan), who is in love with Anna (Suchitra Krishnamoorthi).

In a song, a ‘good don’ is shown opening a bank-safe with an (inverted) Swastika symbol. The don shoots on the safe to open it. What was the need to put up this mark on the bank-safe? Will they put a 786 mark on a bank-safe which is shot open like this? Think.

Why associate Hindu symbols with Nazi ? Why Urduwood never shoots on a crescent-moon or Allah?

Remember, this is the same director who made Jaane Bhi Do Yaaron (1983) featuring that cringeworthy Mahabharata skit scene.
The song, ‘Kaise Don’, was shamelessly plagiarised from two songs. The intro to the song is from ‘Rasputin’ by Boney M. The rest is copied from ‘In Zaire’ by Johnny Wakelin & The Kinshasa Band.