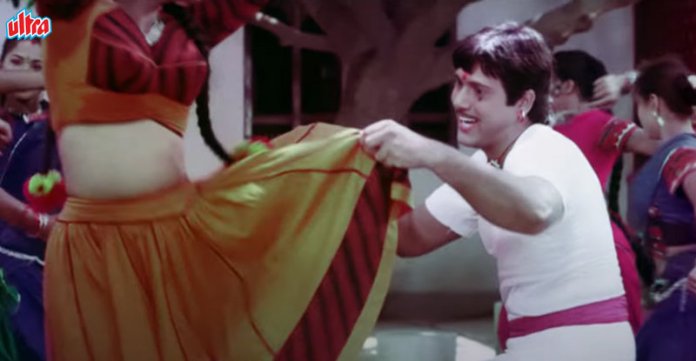 It wouldn’t be wrong to blame movies like Aankhen for normalizing molestation and sexual assault. Showing the lead protagonist lift a woman’s skirt and peeping inside it while she seemingly like it/finds it funny sets a terrible example. This unhealthy obsession with female nudity has been a long-standing Urduwood formula for viewership.

Take this scene, for example:

Twenty years ago, David Dhawan was directing this. Today @Varun_dvn is following the traditionhttps://t.co/Qfz6XeULQ4

This film is full of such gems. The infamous ‘Lal dupatte wali’ song is another gem from this film where the two lead protagonists pull women’s clothes, chase them around a garden and pounce on them. By the end of this song, these women fall in love with them, thereby justifying the molestation.
David Dhawan and writer Aneez Bazmi went on to make many such gems.