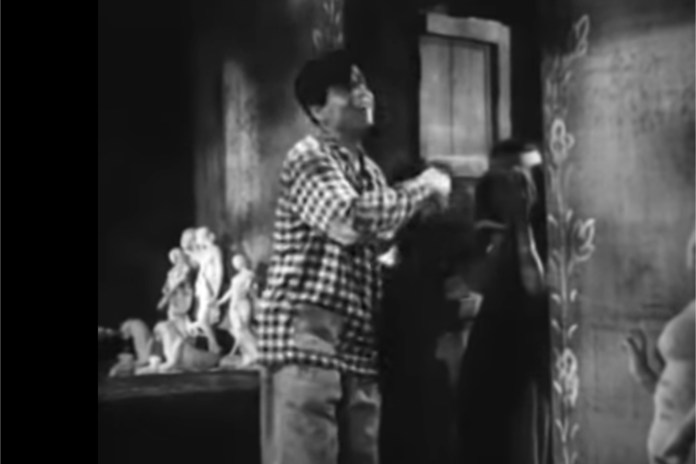 What do you do when life throws lemons at you? Make lemonade? Nope. Rebuke the God that your mother worships. Only Hindu Gods.

In this 1952 release, Yusuf Khan, aka Dilip Kumar, plays a young man named Shankar who cannot marry his girlfriend because her guardian brother, ‘baniya’ Jagat Narayan, disapproves of him. So, instead of convincing her family, Shankar gets drunk and tries to throw away images of Hindu gods from his house. He blames ‘bhagwaan’ for destroying his life and even his drinking problems.

Here are some interesting facts you should know about this movie:

1. This film was made by Amiya Chakravarthy and several artists linked to the Communist Party of India. They claim to be independent of all religions but like to attack only one faith.

2. Such anti-Hindu films frequently portray a baniya as a negative character. Baniyas are a trading Hindu community who have set up many schools, hospitals and religious infrastructure but are maligned with stereotypes of being petty and miserly.

3. Chakravarthy named the baniya neighbour in this film after Lala Jagat Narayan, a freedom fighter and prominent media personality who worked closely with Lala Lajpat Rai. He was an eyesore to Jihadi elements as he fought communalism, terrorism and anti-Hindu forces using his publication ‘Punjab Kesari’. Radicals assassinated him in 1981.

4. When Indians were fighting for their freedom, temperance was a cause that brought activists from various religions together. They saw alcohol consumption among Indians due to colonial influence and campaigned actively for a nationwide alcohol ban. Even Mahatma Gandhi saw alcohol as a foreign importation.

5. When India got independent, prohibition was added to directive principles, and several states implemented the ban. Against this political milieu, Chakravarty’s ‘Daag’ said there was nothing wrong with being an alcoholic.

6. The film argues that people become alcoholics, not because of a lack of self-control but because they are sad. This narrative is worrying in a country where cine-goers ape their on-screen idol.

7. Shankar also has violent fits of rage and gets into altercations. In a scene, he is nearly about to slap his mother. But we should not mind such things because the cruel society has forced the poor man to be a nuisance.

8. Dilip Kumar won the Filmfare award for best actor for this movie.