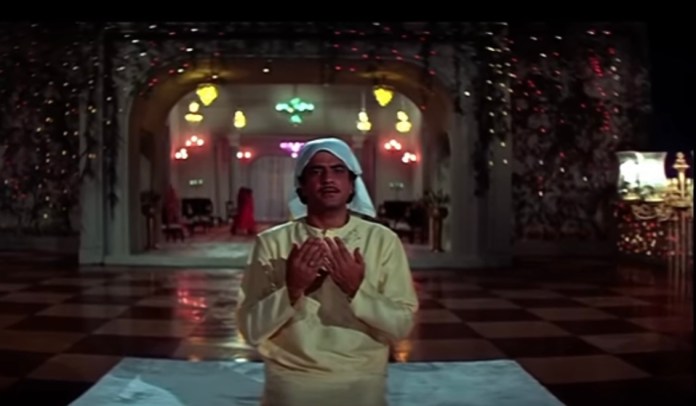 It took a team of ‘progressive’ writers associated with the Communist Party of India to put together Deedar-E-Yaar. And yet, this 1982 film is loaded with regressive sub-plots and anti-feminist clips. Read it again – it wasn’t an unchecked effort by a writer, it was a team.

At the centre of the plot is a love triangle involving Javed (Rishi Kapoor), his dear friend Akhtar (Jeetendra) and a woman named Firdous ‘Changezi’ (Tina Munim). Firdous’s brother disapproves of her beau Javed. So best friend Akhtar comes up with a unique solution – he will marry Firdous instead, divorce her and then she can marry Javed.

Logic – A woman is her brother or father’s property before marriage, and they will decide who will own her next. Ownership rights get transferred to her husband.

What does the woman do in this case? Weep a lot whenever the camera turns to her. Which is what Firdous does throughout the film, when not romancing Javed.

What if the woman doesn’t cry a lot? Then she is a courtesan who dances to classical music and waits to quit the profession till a good man commits to her. In this film, Rekha plays the role of a courtesan who quotes Urdu couplets for every situation, and waits for Akhtar to domesticate her.

Instead of Ms Changezi, if there were a Hindu woman at the centre of this love triangle, perhaps the writers would have let her rebuke Bhagwan and elope with her lover. But good Muslim women are allowed to only weep silently and obey the family patriarch.

The writers didn’t take the chance of making Firdous criticize Allah or rebel against her family. That would have understandably left a bad impression on young minds of a particular community.

Here is another interesting fact. In 1944, this film’s writer Kaifi Azmi, supporting the partition, wrote a poem expressing his desire to celebrate next Eid in Pakistan. You can find the poem ‘Agli Eid Pakistan mein’ here. He went to Pakistan, but came back a few days later. When Somnath temple was rebuilt by Sardar Patel, Azmi penned a poem threatening that doing so would lead to riots leading to ‘Qayamat’ (End of the World).

This film not only encourages cringeworthy attitudes towards women’s rights, it has an equally lousy attitude towards hygiene.

In this scene here, Akhtar makes his mother and Javed drink the same glass of milk. While some may worry about hygiene, Bollywood says sharing saliva strengthens bonds. So, the next time someone spits in your food, don’t fight them. Understand that they do so because they love you very much.

If you want to learn more about Bollywood icons’ obsession with spit, here is another clip:

It is no surprise that producers lost all their money when the movie was released. If you still want to watch this movie at your own risk, it is available on Zee5.