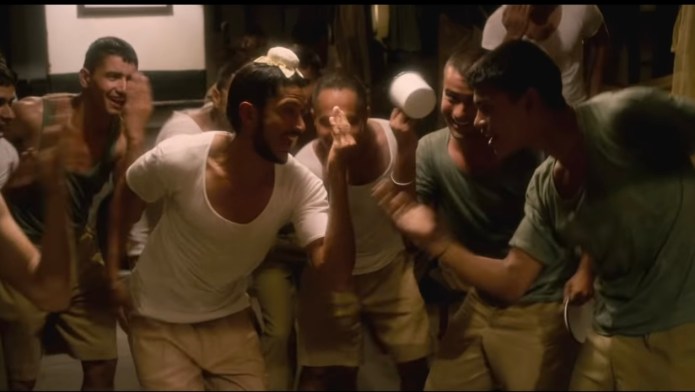 Bhaag Milkha Bhaag is a sports drama based on the life of ‘The Flying Sikh’ Milkha Singh, and uses his autobiography as the source. It is the story of how a small Sikh boy, who escaped brutal killings of Hindus and Sikhs in Punjab in 1947 and battled abject poverty, went on to become a national hero.

However, nowhere in his autobiography did the legendary athelete mention dancing to a rear-thumping song called ‘Havan Karenge’.  When Bollywood made a movie on his life, this song was inserted even though it added no value to the plot.

We wonder if actor Farhan Akhtar and Censor Board chief Prasoon Joshi (also the lyricist of this song) would have enacted a similar “Namaz Padhenge, Namaz Padhenge”?

Criticism and Review as per Section 52 of Indian Copyright Act, 1957. pic.twitter.com/GNfZB5bB9M

When the movie was released in 2013, a Hindu organisation named Hindu Janajagruti Samiti objected to this song, pointing out that the actors were doing an ‘obscene’ gesture every time the word ‘havan’ came up. Further, the movie had several dispensable sex scenes and portrayals of violence too. Yet, it got a U-Certificate from the censor board and received various tax exemptions from several state governments.

There is also a love story in the film, where Milkha Singh falls in love with Biro Kaur (Sonam Kapoor Ahuja). Although both are Sikhs, their celebrate their romance by singing “Alif Allah, Alif Allah” for reasons best known to filmmakers.

Criticism and Review as per Section 52 of Indian Copyright Act, 1957. pic.twitter.com/dckmmvSRCH

Remember, this is the same child who lost his family to religious persecution. We are told that the violence he witnessed scarred him for life.

There is also a scene towards the end of the film when Milkha Singh visits his childhood village in Pakistan and breaks down thinking about the tragic events of his childhood. Just then his friend Sampreet shows up and tells him how he survived the violence, thanks to kind-hearted Pakistanis.

Even when depicting the true story of a partition survivor, the film goes out of its way to show Pakistan in a good light. Because in Bollywood’s Pakistan, everyone is on their best behaviour and loves to take care of Hindu kids.