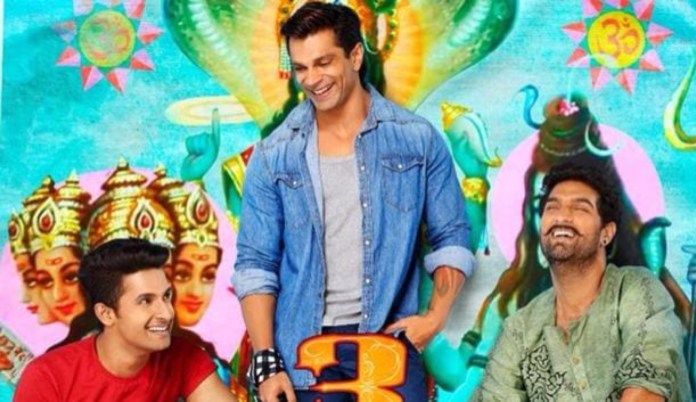 Year of release: Not yet released

Even though the makers of this waiting-to-release comedy could have picked any name, they chose ‘3-Dev: Undercover Bhagwaans’ because lampooning Hindu deities under the garb of humour is an excellent formula for success in Bollywood.

The movie title is just the beginning of the jibe.

As the movie’s trailer points out, the three main protagonists are named after the three supreme deities in the Hindu pantheon – Brahma, Vishnu and Mahesh.

The trailer introduces these characters to the audience as ‘the losers’. It is a trio of a liar, thief and drug addict.

Brahma, played by Ravi Dubey, is ‘jhoota’, while Vishnu, played by Karan Singh Grover, is ‘chor’, and Mahesh, played by Kunal Roy Kapoor, is ‘charsi’.

The mockery of the Hindu faith and its devotees is undoubtedly deliberate.

As we learn from the trailer, these three characters, with the help of their landlord Kay Kay Menon, convince dwellers of a small town that they are the real Tridev in human form. The message is that Hindu devotees in small towns are foolish, and their faith can be easily re-directed by clever men.

Ghalib Asad Bhopali wrote the screenplay and dialogues of the film. Could he have picked up names of revered figures of his religion for such characters? We know the answer.

There is a scene in the trailer where Menon tells these three men to pretend to be deities and do what ‘bhagwaan’ does. What’s that, they ask. ‘Kuch nahi’ (nothing), he responds. It is worth questioning if Bhopali would have used such a gag on his or any other religion or community.

The movie’s poster featured pictures of these protagonists superimposed on images of the three supreme deities. Ramesh Joshi, president of a group called Dharma Rakshak Mahamanch, wrote to the filmmakers and various government authorities complaining about how such portrayal hurt Hindu sentiments and sought to remove such content.

To such objections, the film’s distributor Ayub Khan said, “3 Dev is not a mythological film but rather a contemporary one. It has a unique concept which shows in 2018 the need for the lord to come down on earth. It’s a clean comedy venture. It does not intend to hurt anyone.”

However, one wonders why Khan and his team chose only one religion as the epicentre of this “clean comedy”.

It also seems like they didn’t take these complaints seriously, as there is another poster where the three protagonists are covering their unclothed bodies using a shared red towel. There is a puja ki thali with burning incense sticks in front of them.

Why not Urdu holy names? pic.twitter.com/tX8ioR9VnA

Who will worship such inappropriate things, you ask? Khan, also responsible for this film’s advertising and publicity, will tell you the answer.

The film hasn’t been released so far.