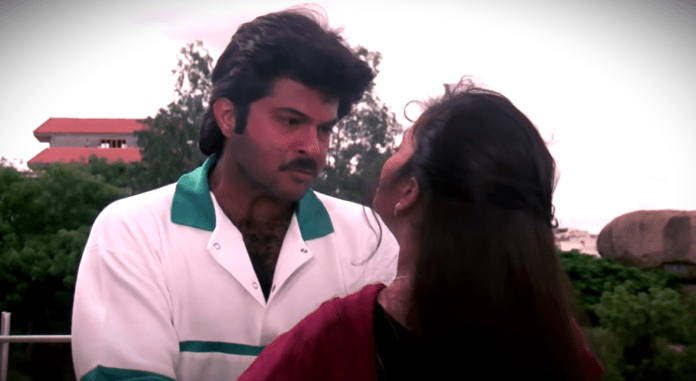 This film was Madhuri Dixit’s big break into Bollywood.

An elaborate scene in the film shows Mohini (played by Madhuri) trying to break up with Munna (Anil Kapoor). She says she cannot continue in the relationship. When Munna, who is a criminal, angrily asks her how she could take that decision alone, given are were in a mutual relationship, she replies that she is very much in-charge of her own life and can take independent decisions.

So far so good, but suddenly Munna holds her tight and threatens her that if she tries to distance, he would chop her into pieces.

Voila! The anger in Mohini melts away. She begins to smile, then bursts out laughing. She continues to laugh for many minutes, before thanking Munna for his true love. He passed the love test, he was not bored of her, she tells him.

Message – Do not stop loving your boyfriend just because he is a criminal, abuses you, wants to beat you or even wants to cut you into pieces. It only means he loves you and is not bored of you already.

Anupam Kher, playing a character named Shyamlal, is the anti-hero of the film. He is an abusive father who makes his daughter dance at dance-bars, and had thrown acid on his wife’s face for not giving into his similar demands. That’s where the film gets its title from.

He swears on ‘Kashi Vishwanath’ during his ugly acts.