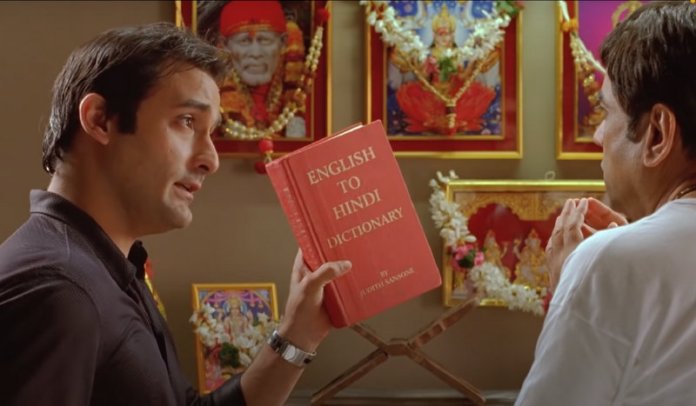 Mere Baap, Pehle Aap (2008) is a story of a man who tries to reunite his widower father with an old college sweetheart while attempting to win his girlfriend’s hand in marriage from her father. It is a remake of a 2001 Malayalam film called Ishtam.
The remake is almost a scene-by-scene mirror of the original, except the Hindi version carries extra Hindu-mocking humour. Take a look at this scene tweeted by Gems of Bollywood, for example, where holy chant ‘Har Har Mahadev’ has been mutilated to become a cheap joke.

In the original 2001 film, there are no chants against Lord Mahadev. Did director Priyadarshan and his team decide to add it because it isn’t possible to make comedy films in Bollywood without such a deliberate mockery that targets a faith?

It isn’t just this scene alone. Om Puri plays a middle-aged man named ‘Madhav’ who lusts after women and has several cringeworthy scenes to his credit. Gaurav (Akshay Khanna) makes irrelevant references to Ma Saraswati when justifying his lie to the cops and the Trimurti while talking about deceit.

There is also a scene where he confronts his father about getting humiliated in college. The father uses the mandir-sthal, Bhagwad Gita and Hanuman Chalisa as tools of hood-winking.

Have you ever seen a Bollywood movie where deceptive pranks happen around Holy Books, couplets and prayer mats for some humour? Do let us know.

And for some reason, best known only to the makers of this film, Gaurav Rane and Shikha Kapoor (Genelia D’Souza) romance to the tune of ‘Ishq Subhan Allah’.