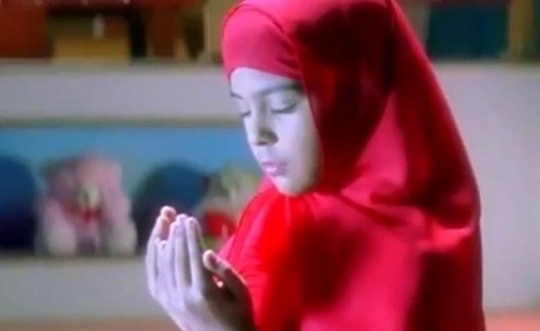 Cringe sets within the first ten minutes of Karan Johar’s directorial debut, when we see little Anjali calling her middle-aged dadi ‘sexy’ just when the elderly woman is preaching about Gayatri mantra and sanskar to a gathering of Hindu women. Of course, we should find this scene (and the implied mockery of Hindu devotees) cute and funny.

A few minutes later, another middle-aged woman, Rifat bi, shows up talking about how to draw the attention of men. However, she is not subjected to such ridicule. She is the respect-worthy, motherly figure who treats her paying guest (older Anjali) like her own daughter.

As pointed out by Gems of Bollywood in several tweets, this movie has several disturbing references.

In a scene, a young Anjali tells her father that she is her daughter, not his wife. This conversation is happening on her eighth birthday, and the audience is expected to feel sorry for the lonely widower.

Her father disagrees because, after all, he is also playing the role of two people in her life.

Criticism and Review as per Section 52 of Indian Copyright Act, 1957. pic.twitter.com/nLKC2TD0mV

Much like most of Bollywood products, this movie doesn’t hesitate from taking a jibe at Hindu sentiments.

In this scene, all buffoonery happens when ‘Raghupathi Raghav Raja Ram’ plays, but when taking Allah’s name, mahaul is suddenly serene and pious. And, of course, it is the new normal to find people attending a puja without a bindi or tilak on their forehead.

Writers of this film didn’t restrict themselves to making a mockery of just one religion. There were repeated gags based on the tired “12’o clock” stereotype jokes about the Sikh community.

The little Sikh boy seemed to have served no other purpose to the plot, except being the victim of unimaginative humour.

Ironically, the stereotype emerges from the fact that in the 17th century, Sikh warriors used to attack Islamist forces at midnight and free women from their captivity. Dharma productions ignored this heroic story to focus on the redundant jibe.

The cherry on top was when we see little Anjali, in a last-ditch attempt to stop elder Anjali’s wedding to another man in another city, offers namaz without help. And did we mention that she also knew how to do hijab properly? Her dua is so powerful that it changes the bride’s kundali, and the wedding is postponed. Her ‘sexy’ dadi and comical nana are impressed by her act.

There is also a blink-and-miss scene where this eight-year-old wears the same clothes as her father’s old love, hoping it would make him miss his old sweetheart. This scene offers nothing to the plot line except normalizing problematic (incestuous?) behaviour.

On a somewhat brighter note, what’s one tiny clip in a movie loaded with cringeworthy, religious propaganda spreading, inappropriate scenes?