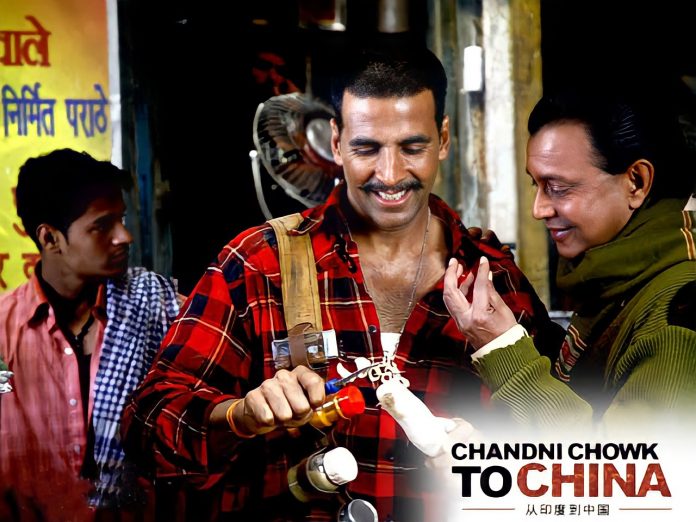 There are Hindu-hating movies, and then there is ‘Chandni Chowk to China’, which takes the usual level of vileness to an altogether new low under the garb of humour.

At the centre of this ‘Kung-Fu Panda’ freemake is Sidhu, played by Akshay Kumar.

Sidhu is a poor vegetable cutter trying to change his fortune by conferring tarot readers, astrologers, palmists etc. The only purpose these props serve is to remind the audience that Jyotish Shastras, Samudrika Shaastras etc. are humbug and experts in these fields are frauds.

Moving on, Sidhu prays to ‘bhagwaan’ to change his luck and wastes money on buying lottery tickets. So, what does Sidhu do when he doesn’t win a jackpot? He curses bhagwaan and casually stomps on pooja thali in supposedly comic scenes.

Same Akshay refused to mouth any dialog against Pakistan

Like countless other Bollywood actors, Akshay Kumar has no qualms in rebuking Hindu deities onscreen. The same guy threatened to walk out of a war film because it had dialogues against Pakistan.

Other than rebuking Hindu Gods, this film also portrays Hindu devotees as buffoons. As pointed out by Gems of Bollywood several times, it is acceptable in this industry to mock Hindu Dharma and their Devi-Devata, but not one celebrity will utter a word against the “Sar Tan Se Juda” brigade.

The movie launches cringeworthy, religious propaganda in one scene after another, like this one here. Sidhu discovers an unusual potato and announces that Lord Ganesha has manifested himself in it. Soon enough, people around him start worshipping the potato, and this discovery makes headlines.

(Video not uploaded by us. But embedded from @Films_Reviews_ tweet)pic.twitter.com/BvNmcVNaxW

Yes, this scene is a comic take on people (Hindus) who see God in mere things like statues and vegetables. Would the filmmakers have used the same logic to giggle at the practice of kissing the black stone at Ka’ba? We know the answer.

Take another scene here, for example. Sidhu is praying to a potato (as if it were Lord Ganesha) for a hoor. He suddenly meets Sakhi, played by Deepika Padukone, and says she is so attractive that she must be from Ganeshji’s den. We would never know why a Hindu devotee would pray for a hoor and confuse Swanand Dham for Quranic Jannat.

This exchange misrepresents Hindu faith at many levels. Why would Lord Ganesha be associated with a den for attractive women? And why would he ‘gift’ these women to his devotees? And why would he do so in defiance of his father Shiva ji (who doesn’t listen to hoor-seeking prayers, as Sidhu complains)?

Who told writer Shridhar Raghavan that this offensive portrayal of Lord Ganesha was funny?

We will perhaps never know answers to these questions. But we do know that Bollywood has had a particular attitude towards the Hindu faith, and it keeps pushing this view point repeatedly in countless movies. ‘Chandni Chowk to China’ is just another vehicle of the propaganda.