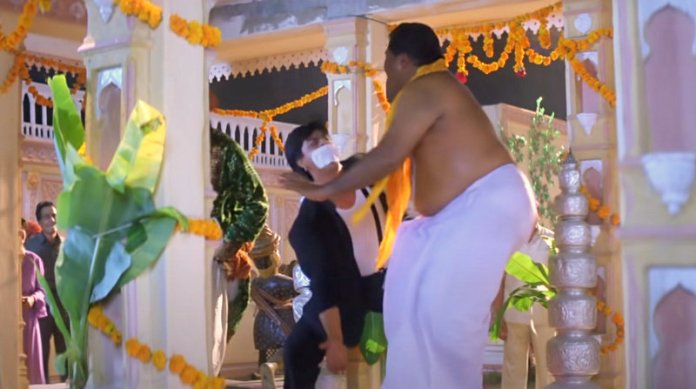 Chaahat is a story of Roop Singh Rathore (played by Shah Rukh Khan) who struggles to keep up his relationship with his girlfriend Pooja (Pooja Bhatt) against stalker Reshma (Ramya Krishnan), who has obsessively fallen for Roop.

In a popular song from the film, Daddy Cool…, there is casual mockery and hate towards Hindu pandits. “I will beat off the Pandit. Pandit ki aisi ki taisi,” sings Roop’s father (played by Anupam Kher.

Have Anupam Kher and Shahrukh Khan ever done such a scene for a Maulvi chanting Kalma instead of a Pandit chanting ‘Mangalam Maha Vishnu’?

In the same song, Kher’s character, who desperately wants his son to get married, tries to convince him by promising her an under-age girl as wife.

The film’s rights are now owned by Shahrukh Khan.

"I will beat off Pandit. Pandit ki aisi taisi"

Did Anupam Kher and Shahrukh Khan ever do such scene for a Maulvi chanting Kalma instead of Pandit chanting Mangalam Maha Vishnu?

Film Chaahat by Mahesh Bhatt whose rights are now owned by Shahrukh Khan.pic.twitter.com/f36p4nxMnV