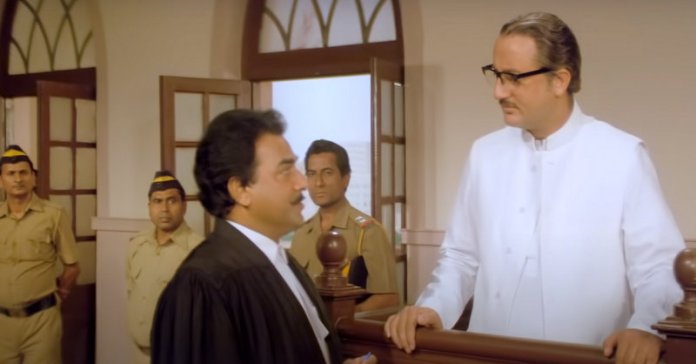 Have you ever wondered how well-known academic institutions gather the audacity to announce “Mahishasur Diwas” and how their professors use derogatory language for Ma Durga? Possibly these people have seen generations of matinee favourites get rewarded for using worse slurs for Hindu Gods and Goddesses onscreen.

In Ramesh Sippy’s Bhrashtachar, Anupam Kher talks about a woman named “Bhawani Devi” (another name for Ma Durga) who operates a sex trade racket under the pretext of running a shelter home for women. He says, “I used to think she was Chandi (yet another name of the Goddess). But in reality, she is Randi (Urdu word for a wanton woman).”

"Bhawani Devi" is into sex-trade. I used to think she is "Chandi" . But in reality she is "R**di"
– @AnupamPKher's excellent performance in "Bhrashtachar" that inspires Mahishasura Divas and "Durga is pro******" narrativepic.twitter.com/oVvQrDsQ0Q