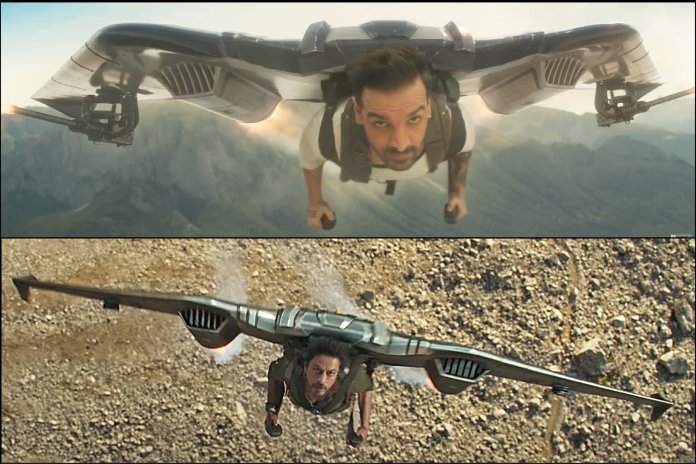 A Pathaan, with help of an ISI agent from Pakistan, saves India from a deadly virus being cooked up in a laboratory by a Hindu scientist and an ex-‘Veer Puraskar’ recipient. That’s the story of newly released Bollywood film Pathaan, which is witnessing massive protests in various cities.

Like Main Hoon Na, the main villain, that is the Veer Puraskar awardee (filmmakers initially kept it Veer Chakra, but censor board got it changed), is a former Indian soldier gone rogue.

In Main Hoon Na, the villain was Raghavan; here, he is Jim (played by John Abraham), cleverly pushing the narrative that terrorism has no religion and that anyone victimised by the state can become a terrorist.

Jim is a trained security personnel who becomes evil because his family was killed many years ago by African terrorists, and the Indian state did nothing to protect them. Like Main Hoon Na, this movie uses a weak plotline to say that if people take up guns against the state, it is because the government forced them to do so.

We didn’t miss noticing that the background track used in Jim’s introduction scene is ‘Ae Mere Watan ke Logon’. Originally sung by Lata Mangeshkar and written by Kavi Pradeep, the song commemorated the Indian soldiers who died during the Sino-Indian War in 1962 and moved many listeners to tears.

The film’s plot isn’t anything new. Indian intelligence is fed up with Jim’s menace and decides that only one man can save them – Pathaan (Shahrukh Khan). Pathaan meets ISI agent Rubina Mohsin (Deepika Padukone) in one of his assignments. They get smitten by each other and have flirty exchanges during gunfires. They eventually save India from Jim’s biological bomb.

Unlike Jim, Rubina doesn’t have any disagreements with the Pakistani government because in her noble country, only one military general is the rotten apple. “If my people find out about him, they will bloody hang him,” she announces.

In one of their banters, Khan learns about Rubina’s life and concludes with admiration, “You became a doctor. Then you joined ISI to serve humanity [“insaniyat ki khidmat”].”

The film’s last scene takes place on the mountains of Afghanistan, where the film’s evil villain is killed. For some, it may be a reminder of Afghanistan’s Hindukush mountains that bear the history of the Hindu genocide. Hindukush literally means where Hindus are slaughtered. The virus Jim created has a Sanskrit name – Raktabeej.

The protagonist, that is Pathaan, we are told came to be called that way many years ago when he saved a madrassa in Afghanistan from a missile strike by the US Army. He was posted in the land under a joint India-US joint military operation. When the madarssa was saved (by a mobile phone!), locals began calling their hero ‘hamara Pathaan’. Even Indian authorities started calling him by this name/

But what’s his real name? It’s not revealed anywhere.

The film goes above and beyond to showcase India-Afghanistan camaraderie and an Afghan tribe as the de-facto family of the protagonist.

Long story short, Afghans are kind, Pakistanis are friendly, humanitarian and pro-active against terrorism, and India relies on the bravery of a Pathaan. The only problems are Indian soldiers gone rogue, who seem to cause terrorism on a whim.

Here is a Gems of Bollywood summary of the film in a tweet:

And yes, the action scenes are spoof material. Helicopter flies out of chimney rotated at 90 degrees. Shahrukh and Salman, who has a cameo, run at a speech of 120 km per hour in opposite direction of a moving train. That is about three times the speech which Usain bolt has managed so far.

Many of those who watched this film have come out of the theatre with IQ lowered. Surely, after 92 years of talkie films in India, the audience deserve more than a mash-up of Hollywood films? What about originality, innovation in story?

Even the songs, posters and dialogues are plagiarised.

You can read more about the team Pathaan here.