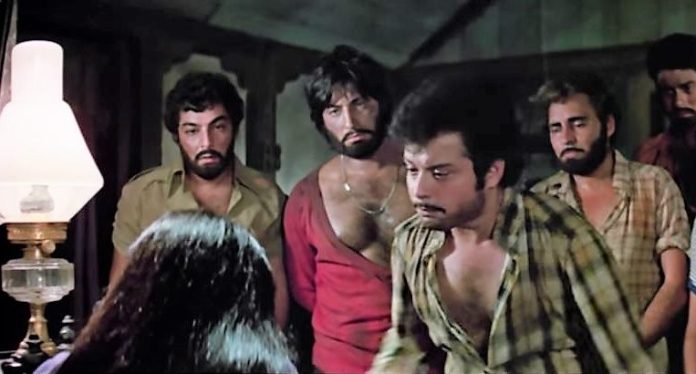 Satte Pe Satta is an uncredited adaptation of Hollywood’s Seven Brides for Seven Brothers (1954). However, even in an “adapted” movie, Bollywood couldn’t resist keeping deeply sexist attitudes towards women at bay.

The film promotes the toxic mentality that you can treat women any way you like (lying, cheating, manipulating, treatment as a mere sexual commodity, abduction) as long as you do it under the pretext of humour and marry her eventually.

At Gems of Bollywood, we compiled a list of a few gems from the film. For starters, look at this song where the leading lady guides her brothers-in-law on how to trap (not woo) a woman.

Urduwood tips on targeting one girl after another till you can trap one like a fish.

One probably can’t find a healthy relationship based on mutual respect and admiration in Bollywood because this industry believes that true love exists only in the eyes of the man who ogles at a woman while she has a beach picnic with her sisters, unaware of his presence.

It is hero-like to be Peeping Tom and encroach privacy of women when they bathe. If you are aroused and your body finds ways to relieve, it must be celebrated and highlighted

To make matters worse, Satte Pe Satta promoted several dangerous attitudes against women that remain unchecked. Check out this scene below where Ravi, moved by his brothers’ yearning for their women in the dead of night, agrees to an abduction plan. This scene sends the impressionable audience the message that it is a bold romantic gesture to kidnap a woman if you miss her at night.

"We get desperate for girls in night. Lets kidnap & drag them into our den. If family resists, we will teach them lesson"

Urduwood's notion of manliness continues to be tragedy for countless girls@SrBachchan sings anthem of kidnappers in Satte Pe Sattapic.twitter.com/5JeA2Cx8gv