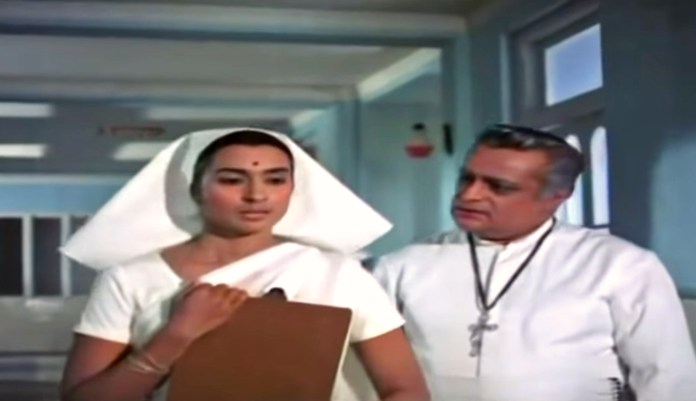 Maa Aur Mamta is a story of a Hindu woman named Maya, who raises a baby handed to her by a church priest and how that child grows up to be a young man who endorses the Bollywood interpretation of “respecting all religions alike”.

For some reason, Father Henry imposes this responsibility of fostering a baby on a young unmarried Hindu woman, and not a trustworthy couple from his community.

He explains that the baby may be harmed by his own father who wrongly suspects the priest of siring the child. Maya and her father abide by his request without questioning his explanation.

This film doesn’t waste much time before launching the tilak-dhaaris-are-always-villains trope. The unmarried mother draws many frowns of disapproval from local villagers and is soon cornered by a mob of angry men and women. A bare-chested man leads this mob with a large red tilak on his forehead.

Instead of explaining the situation and, perhaps, seeking help from the community in protecting the infant, Maya flees with the baby. She is barely out of sight when Father Henry and the baby’s father, having resolved the doubts over the child’s paternity, arrive at the scene and chastise the ‘backward Hindu’ villagers for misunderstanding Maya.

Maya arrives in Bombay and is harassed by two goons named ‘Sevak Ram’ and ‘Bhagat Ram’, but is saved by Mohammed Qasim, a taxi driver who single-handedly beats the two goons, who are very apparently younger than him.

Message – Even an elderly Muslim man is stronger than two Hindu men together! This is the theory of ‘One Muslim = 10 Hindus’ in action that has been propagated by Pakistanis forever. To more about that, read this piece by team Gems of Bollywood.

Burdened by her troubles, Maya tries to leave the baby in a church. But, she gets moved after seeing a statue of Mother Mary with baby Jesus.

She picks up the baby again and prays to Mary: “Maa, Mujhe Shakti do” as the camera lingers on a statue of Mother Mary and another of the Crucifixion.

Note how Maya, a Hindu woman, refers to Mother Mary as ‘Maa’. This scene reeks of a proselytizing tactic commonly used by Christian missionaries in India, in which they adapt Biblical figures to Hindu references as a gateway to Christianity.

Qasim chacha offers to keep Maya in his home “as his daughter”, and for some reason, Maya trusts this single Muslim man enough to enter his house with a baby. Meanwhile, in the real world, such stories end up with the man circumcising the child without the mother’s permission. Read ground reports by team Gems of Bollywood here, here and here.

If anybody in Bollywood has to prove he or she is not a narrow-minded communal person, it has to be a Hindu. When confronted with a situation that tests her secularism, she passes with flying colours.

Qasim offers her tea, assuring her that it is from a “Hindu hotel”. Maya responds she is not close-minded. How could she be when the goons harassing her were Hindus, and the “farishta” who saved her was Muslim? She says as much.

The film tries to push the idea that Hindus are the ones who refuse to eat food made by people of other religions. Meanwhile, in the real world, it isn’t easy to find a non-vegetarian restaurant in India without a halal stamp.

Two decades go by, and Qasim continues to allow Maya to raise her surrogate child as ‘Ram’ and keep Hindu murtis in his home. Perhaps Bollywood wants to believe that fatwas issued against Muslims wishing Diwali and Holi are not by “sachcha Mussalman”.

Ram grows up to be a class topper and hockey star at his college, and he has a girlfriend named Mary. Upon hearing the news of Ram excelling in academics, Maya thanks Bhagwan. But Ram corrects her and says his success is the fruit of his mother’s ‘dua’.

Message – The good Bollywood hero must always be angry at (only) Hindu Devi/Devta and question their powers. After all, this industry has a long-standing tradition of inserting elaborate scenes where Hindu Devi-Devta and their murti are mocked as pieces of stone that don’t have any capacity to protect their believers. Read this piece by team Gems of Bollywood here.

Both Maya and Mary’s father are not keen on letting the young couple get married. Mary’s father, however, agrees on one condition- Ram should become Raymond, that is, convert to Christianity.

Ram does not agree to this condition put down by Mary’s father. His defiance might lead some people to naively assume that Ram will defend his dharma and refuse to convert on principle. But Ram only refuses to convert out of love of his mother, not his religion. Ram has the same attitude towards religion as children have towards Pokemon-to catch them all.

He had hoped to add Christianity to his profile, already having Islam and Hinduism in his home and giving birth to a new religion: “insaaniyat”.

Ram’s problems are solved in the end when he learns he was born to Christian parents. If this film were truly ‘pro-secular’ by its logic, it would have ended with the two families accepting the interfaith marriage. Instead, it ends happily by erasing Ram’s Hindu identity altogether.

Films like these love to push the ‘can’t we all get along’ motto, usually projecting Hindus as an obstacle to this vision.

It shows how long the Bollywood industry has been insidiously poisoning the Indian public with false ideas: that a Muslim man will allow a Hindu woman and her child to remain un-converted in his home and practice their religion, that Hindus pray to Mother Mary and refer to her as ‘Maa’, and the biggest lie of all- that proselytising faiths will allow Hindus to thrive without trying to convert them.