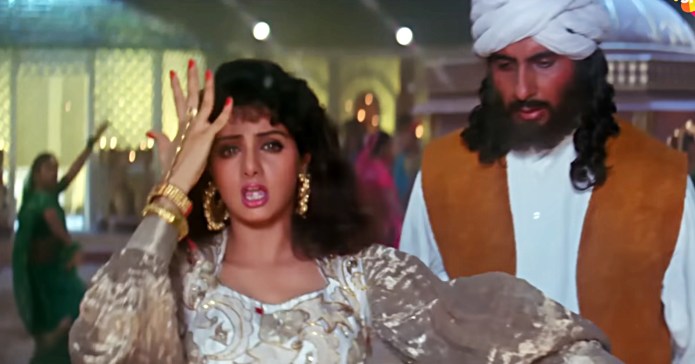 Bollywood has been peddling its imaginary narrative on Pathans for a very long time. It is a narrative that is completely disconnected from reality and historical facts. You might want to read the Gems of Bollywood article on Bollywood’s fictional Pathan here to understand more about this argument.

But unlike movies with a sidekick Pathan character, Khuda Gawah is a 3 hours, 11 minutes long film dedicated to this misleading portrayal.

Here is a gem from the film where Amitabh Bachchan puts up a fake accent to tell you why Afghans seek refuge in India (even though the Bollywood brigade finds the country intolerant). He says, “Romance is my religion…This is why this Pathan from Kabul has come to India.”

And how can Bollywood make a movie on Pathan’s fabled qualities without asking Hindus to see the virtues of his religious beliefs that would make them feel ashamed of their bigotry? Here’s Bollywood preaching secularism and religious tolerance to India’s majority community and tips on worshipping Lord Krishna.

Can one share a single onscreen example where the lead protagonist chants Hanuman Chalisa or reads a Dharmic holy book inside a masjid?

Where?
In a mandir in front of Bhagwan Krishna idol

Can one share a single example of Hanuman Chalisa inside a masjid?