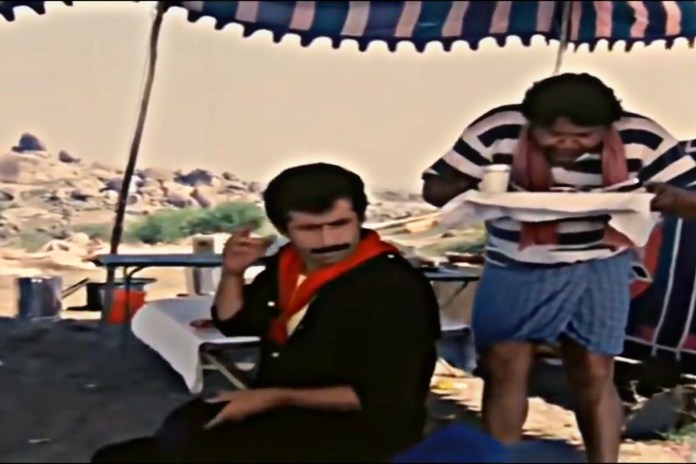 The 80s was a challenging decade in India. Terrorism was reaching its peak, and insurgency crippled everyday life in Assam, Punjab, and other states. When this movie came out, Kashmiri Pandits were on the verge of their mass exodus from the valley.

In such times, you would think that Bollywood would have made films that promote unity and condemn divisive sentiments. Keep thinking that while the industry fails you repeatedly with films like Hero Hiralal.

Presenting Hiralal, a smug Hyderabadi auto driver, who carelessly runs over a man named ‘Bhagwan’ within ten minutes into the film. Instead of apologising, he insults the victim with – “What Bhagwan? Bhagwans, like you, are sold here for a quarter of a rupee.”

This is followed by – “Get out of here before I reduce you to a human.” He laughs about this incident with his friends later.

If you have doubts about what is wrong in this scene, replace the victim’s name with God from any other religion.

Later in the movie, he seeks this very Bhagwan’s help to win over his sweetheart Roopa.

In another scene 30 minutes into the movie, a joke is made around serving food to a client with thook (saliva) in it. Readers may recall recent incidents in the country where Muslim dhaba cooks have been arrested for spitting into the food before serving it to their customers.

It is quite puzzling why the directors named Naseeruddin Shah’s character Hiralal when he keeps alluding to Allah. He also has a specific life goal. He wants to be an ‘aashiq’ who will die for love.

But a few minutes later, he slaps the woman he claims to love at a gathering because she doesn’t love him back. ‘Itna guroor’ (such arrogance), he hisses.

Message – It is okay for a man to batter a woman if he loves her. This normalisation of abuse as love continues in Bollywood with films like ‘Kabir Singh’.

Cringeworthy enough, Roopa’s mentor says she herself yearns for a man like Hiralal who can love her so much. No amount of wealth buys such love, she sermonises.

Also, we noticed that Roopa covers her head in a hijab-like fashion (even though she is a Hindu character). Roopa is an actress who is always fully covered in matronly salwar kameezes, maxi skirts and full-sleeve tops, while her mother wears glamourous sarees. And, as we all know, only evil women wear sleeveless blouses in Bollywood.

Eventually, Roopa realises that in a world of wealth and glamour, ‘slap man’ Hiralal’s love is all she needs. Hiralal never apologised for the slap, by the way. You have our sympathies, Roopa.