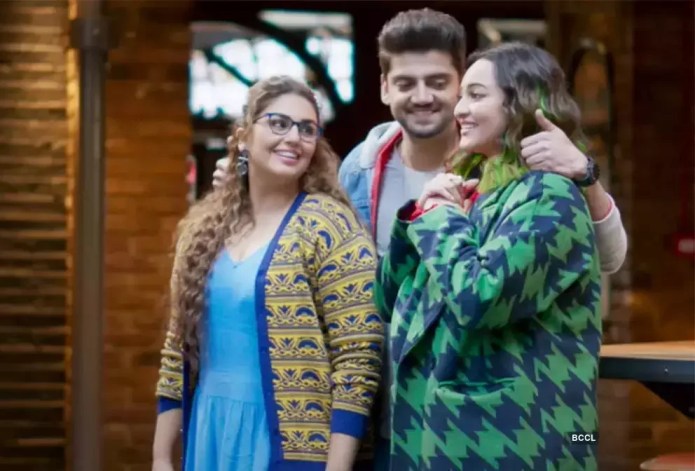 Double XL is a poor attempt at telling a story of two women who have ambition and spirit but the world around them constantly puts them down for being overweight.

Rajshri Trivedi (Huma Qureshi) from Meerut wants to become a television sports presenter, but her conservative mother would have none of it. All she wants is to get Rajshri married before the family encounters any further shame of keeping a 30-year-old unmarried daughter at home.

Delhi girl Saira Khanna (Sonakshi Sinha), a fashion designer by training, wants to create her own designer label even as she is dating a moronic gym-enthusiast named Viren.

While Rajshri suffers humiliation from a potential match who comes with his family to see her and tells her she “is a bit too healthy” and hence rejects her, Saira faces a major shock as she catches red-handed her boyfriend cheating on her with a much slimmer woman. Professionally too, both Rajshri and Saira face rejection.

The two women happen to meet and bond over their frustrations. But it leads to something bigger: a chance at their career. The women immediately fly to London to shoot a film for Saira. Don’t get into the Whys and How’s of this journey, as Bollywood has cultivated an audience that does not go into the technical or logistical details.

We are not going into what happens next. The film’s wafer-thin plot is evident from the film’s trailer and the first ten minutes.

Let’s instead talk about the interfaith relationship twist in the tale. Zorawar hits on Saira from the moment they meet. Saira’s only reason for resisting his advances is that she was recently heartbroken and mistrusts all men. In what is meant to be a poignant scene (but isn’t), Zorawar scolds her for painting all men with the same brush.

Eventually, she sees how Zorawar is so unlike other (Hindu) men, who are characterised as dumb, weak, spineless and liars. Zorawar is Gold. A true man. And he is a Pathan.

This is revealed when Zorawar invites the three to his home for “Nihari” prepared by his “Ammi”. He asks the women to come traditionally dressed as they would be entering “the house of a Pathan”.

If the upcoming film ‘Pathaan’ with cringe dialogues like “I am a soldier, Pathan” and “If you host a party at Pathan’s house, the Pathan has to be there” wasn’t enough, Double XL goes out of its way to specify and glorify the ethnicity of the Muslim man.

A week before this film, released Tara vs Bilal, which was the story of Tara ‘Kaul’, who is cheated on and dumped by her fiance ‘Karan Sharma’, and rescued by (and eventually falling in love with) ‘Bilal Khan’ (a Pathan, if you did not make that out from the surname yourself).

As one can see, all these films on interfaith relationships have shown men as Muslims and women as Hindus, and not the other way around.

T-Series Films have produced both Double Xl and Tara vs Bilal. While Mudassar Aziz wrote the former, the latter is written by Sanyukta Chawla Sheikh and directed by her husband Samar Iqbal.

In both films, the Muslim identity of the leading man is not crucial to the film in any way. They could have had ‘Kumar’ as their surname, which would not have affected the story.

It is to be noted that Zorawar makes a joke whenever anyone mentions his name. The moment anybody is about to say ‘Zorawar’, he goes – “Zo Za Zo, call me whatever you like”. To an alert ear, it looks like an attempt at drilling deep into the viewers’ minds that his name is Zorawar, in case they forget the names once they step out of the theatre.

Considering that no major Bollywood film between the Tanishq ad and Double XL has shown a love story between a Muslim woman and a Hindu man, it can be easily concluded that the industry is on a spree promoting conversion-nikah for Hindu women. This is in line with the conversion-nikah propaganda pushed in films in Pakistan, where children grow up with ‘Ghazwa-E-Hind’ dreams. This is also in line with the alarming ‘love jihad’ pattern in Indian society today.

And did we tell you the violent backlash that Bombay and Gadar, released in 1995 and 2022, respectively, received from the Muslim community for showing marriages between Muslim women and non-Muslim men? Theatres were burnt down, bombs were thrown at the filmmaker’s house, police officers were attacked for giving security to theatres, and large-scale arson took place on roads.

After that, Bollywood stayed away from films on interfaith relationships for a long time. The theme has returned in a big way in the industry since at least 2014 with the release of Pakistani propaganda
film ‘pk’.

Two years before pk, Ishaqzaade was a rare film on the romance between a Muslim woman and a Hindu man. But, and it’s a big but, the man was shown converting to Islam to marry her.

Coming back to Double XL, we also didn’t miss the scene where Rajshri ‘Trivedi’ is shown ordering “chicken burger”, because, you know, all progressive characters in Bollywood films are meat-eaters, especially if they are from the Brahmin caste.